Understanding layouts is important for good Android application design. In this tutorial, you learn all about relative layouts, which organize user interface controls, or widgets, on the screen in relation to one another, or to their parent layout. When used correctly, relative layouts can be the powerful and flexible layout upon which many interesting Android application user interfaces can be designed.

What Is A Relative Layout?

After linear layouts, which display controls in a single row or column, relative layouts are one of the more common types of layouts used by Android user interface designers. Much like other layouts, relative layouts can be defined within XML layout resources or programmatically in the application’s Java code. The relative layout works much as its name implies: it organizes controls relative to one another, or to the parent control itself.

What does this mean? It means that child controls, such as ImageView, TextView ,and Button controls, can be placed above, below, to the left or right, of one another. Child controls can also be placed in relation to the parent (the relative layout container), including placement of controls aligned to the top, bottom, left or right edges of the layout.

Relative layout child control placement is defined using rules. These rules define how the controls within the relative layout are displayed. For the complete list of rules for relative layouts, see the Android SDK documentation for the RelativeLayout class. The associated XML attributes for use in XML resources are also defined in the documentation.

NOTE: Rules require that each child control has its id attribute set properly.

The following figures show just such a relative layout, displayed in portrait or landscape mode. The relative layout has two child controls: an EditText control and a Button control. 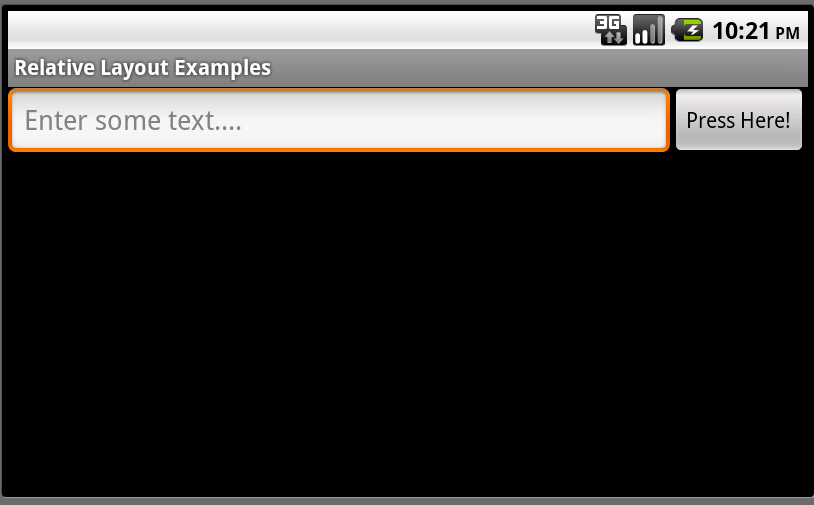 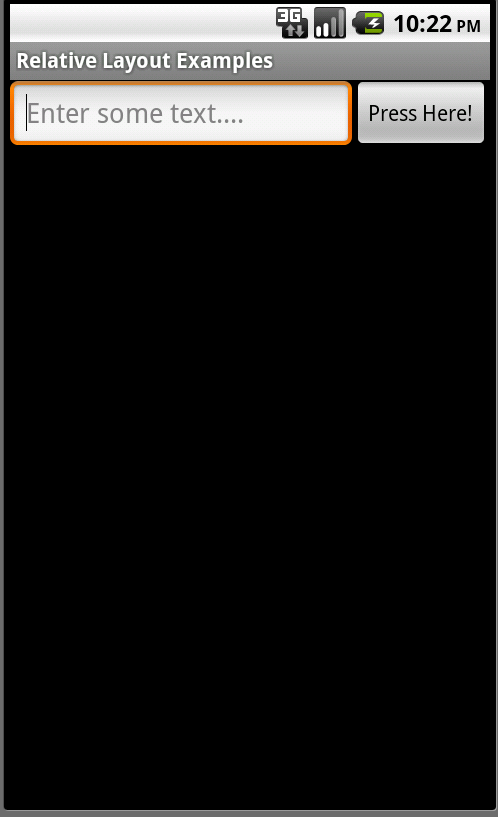 Defining an XML Layout Resource with a Relative Layout

The most convenient and maintainable way to design application user interfaces is by creating XML layout resources. This method greatly simplifies the UI design process, moving much of the static creation and layout of user interface controls and definition of control attributes, to the XML, instead of littering the code.

XML layout resources must be stored in the /res/layout project directory hierarchy. Let’s take a look at the relative layout introduced in the previous section. This layout resource file, aptly named /res/layout/relative.xml, is defined in XML as follows:

This relative layout has its width and height set to fill the screen and three rules configured on its child controls:

You can also programmatically create and configure relative layouts. This is done using the RelativeLayout class (android.widget.Relative). You’ll find the child-specific parameters in the RelativeLayout.LayoutParams class. Also, the typical layout parameters (android.view.ViewGroup.LayoutParams), such as layout_height and layout_width, as well as margin parameters (ViewGroup.MarginLayoutParams), still apply to RelativeLayout objects.
Instead of loading a layout resource directly using the setContentView() method as shown earlier, you must instead build up the screen contents in Java and then supply a parent layout object which contains all the control contents to display as child views to the setContentView() method. In this case, your parent layout would be the relative layout.
For example, the following code illustrates how to programmatically have an Activity instantiate a RelativeLayout and place a TextView and a Button control within it in its onCreate() method, much like the one shown in the previous section:

Let’s take a closer look at the Java code listing above. First we create an EditText control as normal. We give it some RelativeLayout parameters, and then set its rules. In this case, we create two rules for the EditText control.

Next, we create a Button control and set its rule (align to the right-hand edge of the parent layout). Finally, we create a RelativeLayout object, set its parameters, add the two child controls using the addView() method and load the relative layout to display using the setContentView() method.

As you can see, the code can rapidly grow in size as more controls are added to the screen. For organization and maintainability, defining and using layouts programmatically is best left for the odd case rather than the norm.

Also, general ViewGroup-style attributes apply to relative layouts. These include:

Now let’s put some of these rules into action!

Let’s look at a more complex screen design. For the purposes of this exercise, we will start by looking at the final screen design, and then will work backwards, discussing the relative layout features and rules used to achieve this final result.

Let’s say we want to design a screen that looks like this: 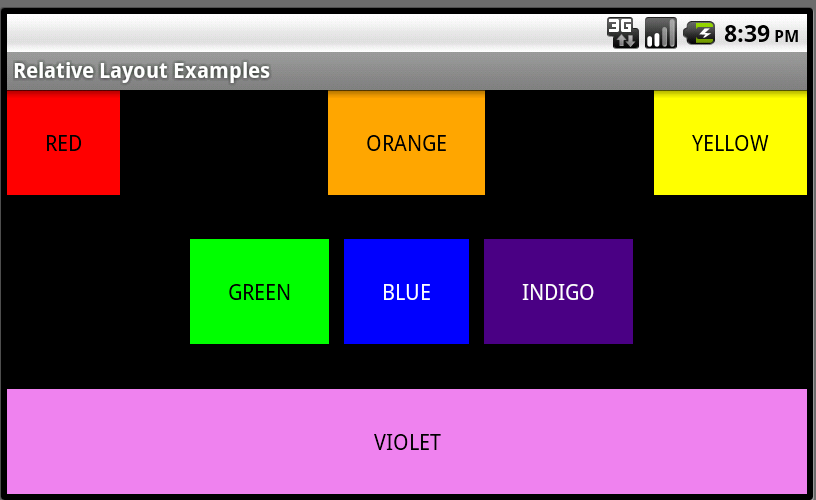 In order to design this screen using a relative layout, continue with the following steps.

Step 1: Define a Relative Layout in Your XML Resource File

Next, we determine what child controls we need. In this case, we need seven TextView controls (one for each color). Configure them as you normally would, setting text attributes to strings, background colors, font sizes, etc. Place each of these controls within your relative layout.

Next, we define the rules for each child control, in order to get them to draw in the appropriate places:

If you define these rules in your XML resource file, it should now look something like this:

Here are some tips for working with relative layouts.